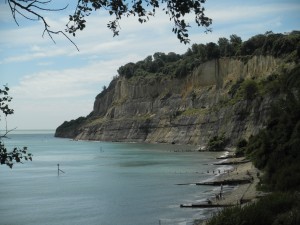 Alright. One word about this B&B we stayed at in Sandown (Altavia Hotel). How weird!! Don’t book there! When we arrived there yesterday the front door was locked, nobody answering the door bell or phone for 15 minutes. When we finally got in (the owner(?)) was in the garden and couldn’t hear the door bell), we had the choice between 3 bed rooms. Showing us all rooms and running through the entire house we decided for bed room number 4. Not knowing if we had towels in our room the owner got us some and entered our room without knocking. (Imagine a couple is making out and all in a sudden you’ve got spectators). We were also allowed (in case there was no tea/water kettle in our room) to take it from one of the other rooms. Alright, finally alone, we just wanted to freshen up a little and go out for dinner. But: the light in the bathroom didn’t work. No window, we would have needed to shower in the dark. That’s why we moved from room 4 to 3, which was one of the 3 we were shown before. Advantage of this one: a TV. Still the Brazil – Netherlands game in mind we considered having a quite evening at the hotel instead of going to the pub. Well… the TV wasn’t working. At his point my being really pissed off turned into laughing. It was so bad that it started to becoming funny.
When we went for breakfast this morning, we found our bill for the night on the table. What a good start into the day. My fruit salad that I ordered yesterday (“What do you want for breakfast? You name it, we’ll do it!”) turned out to be a bowl with 4 pieces of fruit (2 plums, a nectarine and a mandarine). If I had stayed alone in this hotel I would have been scared to death…

However, the day was much nicer than the morning. Whereas we mainly walked along beaches and promenades yesterday, the coastal path went high up on the cliffs, passing beautiful houses and cottages with flowering gardens. So, so pretty! Around lunchtime we saw more and more people on the trail, locals probably going for Sunday roast. We, instead, had ice cream. Again. The number of the day: 6. We had 6 ice creams in the last 24h. You can’t call that a good workout but life is so much better with a Magnum Classic!
We finished at Ventnor, cutting our initially planned distance by half to be back in London for the World Cup final. Once again: Who had the idea to go to the IoW on this weekend?? Well, again: that was me. But who didn’t researched for major events today?? That must have been Prasana –> shared responsibilities :-).

All in all it was a enjoyable trip although I preferred the route of the 2nd day. More green, less people.