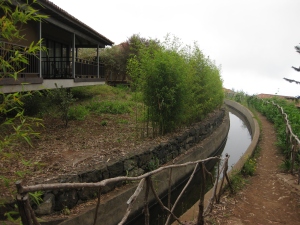 Monte to Camatcha along the Levada dos Tornos

We started our walk from our hotel in Monte, which unfortunate for us, was kind of at the bottom of Monte, whereas the access point of our Cicerone walk was a 2k walk and ascent of 500m up. Good exercise before we even started :). On the way, we saw Monte’s traditional wicker sleigh riding. A wicker sleigh on wooden runners steered by two guys, sliding down the asphalt roads of Monte. Wicked!
Once we found the starting point of our walk it became much quieter, passing a few villages and private residential complexes, for my taste still a little close to civilisation. As the Levada dos Tornos is quite close to Funchal, we saw lots of big groups of tourists driven up the hill in a big coach and walking along the levada. For my taste a bit too many people. 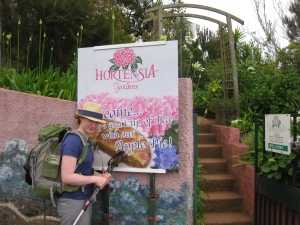 HOWEVER, we passed the Hortensia tea room that advertised its amazing apple pie on a big wallpaper. So we decided to spend our lunch break there and I tell you, that cake was well worth it! (Isn’t it funny how you go for the things you love instead of trying new things?) Well, at least in this case.
Later that afternoon, we arrived in Camatcha after a 15k walk and stayed in a little self-catering bungalow with a very cute garden, waiting to get started again the next morning.

Monte is famous for its wicker sledge riding or toboggan rides. The wicket sledges were primarily used for transport down to Funchal in the 1850s when they first appeared. 2 men in traditional white cotton shirts, trousers and a straw hat steer the sledge with their rubber-covered boots along a 2 kilometres long, mostly straight, narrow street. There are 2 sharp 90-degree curves that makes the steering really interesting, because you speed up to almost 50km/h. Nowadays, it’s one of Monte’s major tourist attractions and most tourists we’ve seen sliding passed us really enjoyed themselves. The starting point is at the top of Monte, at the Nossa Senhora do Monte Church. They have sleds for 2 or 3 people and prices are as follows: 1 person 25€, 2 people = 30€, 3 people = 40€ (as of June 2016).

More about walking in Madeira:

This entry was posted in Portugal. Bookmark the permalink.